Many of us have a photographic history that goes back to the Film Age. In those days worried photographers roamed the land searching for three excellent pictures to "finish off the film". They would then wait and fret for a week, wondering if the pictures would "come out".

During my long path to digital photography, I switched to Fuji Provia and had the film developed at the local pro labs with the intention of scanning the images in my new SCSI slide scanner. While the slides looked great and the scans were not too bad, the whole process took so long that many of the images were left unscanned. The scanner did not cope well with high contrast images and tended to sacrifice all the detail in the shadows.

Fast forward: Now I have a DSLR or two, a remote triggered flash and a macro lens. It doesn't take much analysis to realise that my top quality macro lens (even these guys regard it as one of the best lenses they've tested...) with a 36mm wide field of view  has the makings of my own slide scanner.

Pause for an explanatory picture. Here's what it looks like: 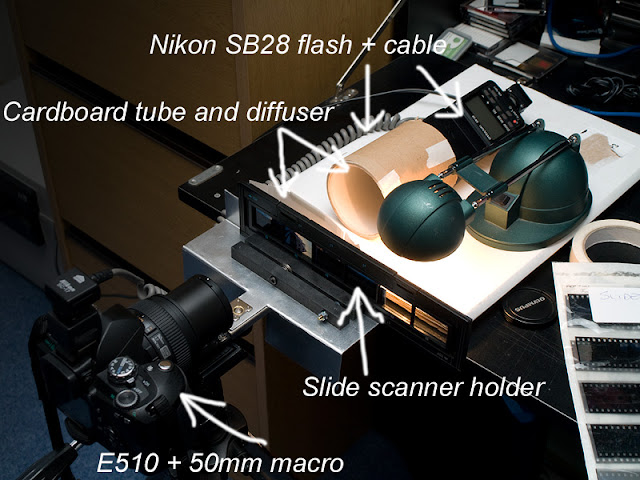 So, I took the film and slide holder from the old Dimage slide scanner, fabricated some folded Aluminium around an old off-camera flash bracket so the whole thing mounts on a tripod. Behind the slide are several layers of diffuser with the remote flash set to manual mode and 1/64th power aimed at the camera lens.

Fixing the flash output power and the lens aperture means that the DSLR image exposure does relate strongly to the slide exposure. Dark and light slides are rendered as dark and light images. A fairly high shutter speed reduces camera shake. You can even use live view manual focus if you really want to get picky. However using auto focus with the desk lamp allows me to take a picture every 10 seconds. Now that is a whole lot faster than the slide scanner - which took a couple of minutes to do its pre-scan and its image scan. It took even longer with a dark image.

Here's what it looks like when the flash fires... 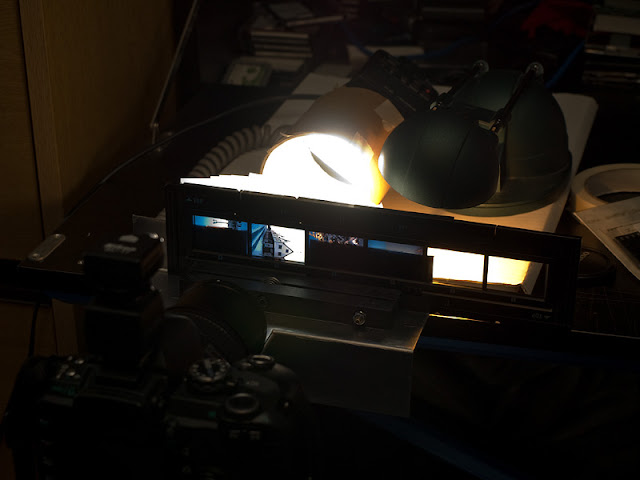 It turns out that the results (and there are lots of them visible in my blog entries) are generally as good as or better than the slide scanner in terms of resolution, noise and image depth. The fact that the whole process is so much faster now makes the task of digitising my slides a great deal easier. 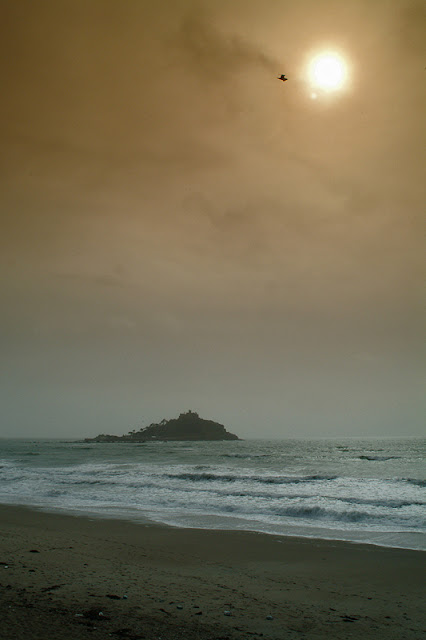 This rig will also work on black and white negatives. You simply invert the grey scale as part of the Adobe Raw processing and the results are also very good. Here's an example scanned negative: 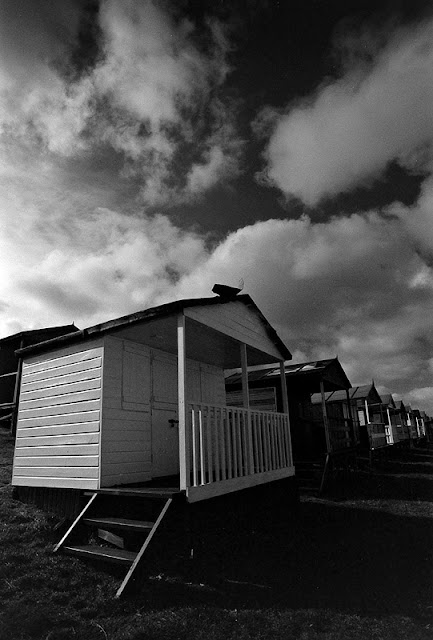 I have adapted it to work with colour negatives as well. In this case I place a  blue filter over the flash. This tends to redress the worst of the colour cast caused by the red-orange filter layer in the colour negative film. You then invert the grey scale and use the Adobe Raw eye dropper to set a suitable part of the image as neutral grey.

So, if you have the appropriate bits and pieces, you already have the makings of a home made slide scanner. Get scanning!
Posted by Pete (The Snaarman) at 09:19

Email ThisBlogThis!Share to TwitterShare to FacebookShare to Pinterest
Labels: Film